The route from London to the Red Sea – red is by rail, green is by road, blue by boat.

In the midst of London’s seemingly endless snow and deep cold of the last few months of 2010, I began planning an overland journey that would take me from St Pancras to the shore of the Red Sea. 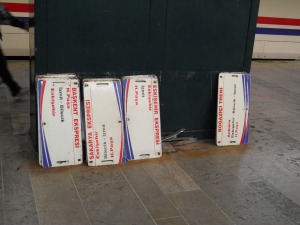 Thirty years previously, a series of passenger trains would have carried me from central London to the short Jordanian coastline over shining rails that broke only for the English Channel and the Straits of Bosporus. Of these gaps, the first has long since been filled, and the second is in the process of being removed. Trains would have carried me over lines whose very construction represented attempts to shape patterns of political control and cultural influence within the Middle East: the Berlin-Baghdad Railway, stretching across Turkey and into Syria, constructed by expansionist German regimes across the first 40 years of the last century; or the Hejaz Railway, the narrow-gauge line built by the teetering Ottoman Empire to allow for the faster movement of troops to its rebellious possessions in Arabia, for which private funding was cleverly obtained throughout the Muslim world on the basis of the line’s secondary purpose of making the Haj pilgrimage less onerous.

But faced with competition from roads that could offer far shorter journey times, passenger services beyond Damascus withered to little, then nothing, then briefly flared up to very little, before settling down to probably nothing. Nevertheless, a surface route to the Red Sea – a goal for the sake of having a clear goal somewhere near places I wanted to visit, if I’m completely honest – remained feasible, and if taken in a leisurely way could link in to plenty of interesting places. Gradually, I pieced together a route that would take me through nine countries (and four UK bank holidays) via a succession of trains, buses, ferries, the odd taxi and some guesswork.

Then things started to go a bit wrong.

First, long-term engineering works, of indeterminate length, led to the cancellation of the Istanbul-Aleppo direct sleeper. Fine – I’ll fit the plan around the Fridays-only Adana-Aleppo overnight service instead.

Actually, we’ve just decided that should only run in the summer. By which we mean from May onwards. OK, slightly complicated route devised using domestic Turkish trains, a bus and a twice-weekly train into Syria from Gaziantep.

Fine. Oh, you want to travel via Kayseri? Ah… Surely that works. There’s a daily overnight service from Istanbul. Yes, there is. Well. We’ve decided to still run seven trains a week but two of them will now run on the same night of the week. So there’s a gap. Let me guess, the gap is on a Wednesday. Yep. That wouldn’t be when you need it, would it? Haha. Very funny. OK. I’ll go via Konya instead. That’s ok. Well, there might be some engineering works on that route. But we can’t really tell you now. I’ll take the risk. By the way, why isn’t the Turkish Railways online booking system working – I’ve told it my level of education, just like it randomly asked me. Why should it be working? Look at the time – it’s well outside working hours in Ankara. You do know what the point of online systems is…oh, never mind.

The Turkish segment finally fell into place. Then Greece reared its head. Seemingly under the orders of its creditors at the IMF and EU, it announced the cancellation of every international train, including the Thessaloniki-Istanbul train on which the plan rested. An alternative route, including slightly too long on trains, was devised via Skopje and Belgrade, though no-one could tell me for certain if bridge replacement works might lead to the cancellation of one of these trains.

Then, as winter turned into spring, things started to get a little interesting in the Middle East. The possibility of imminent major political change arising from demographic changes had been one of the factors that led me to consider the journey. Nevertheless, when I started planning, the Arab Spring was probably a Saudi mineral water producer. After Egypt and Libya, popular demonstrations against the al-Assad dynasty in Syria flared up, and then seemed to quieten again. Nevertheless, the centre of the uprising was the southern city of Der’aa, where the sole remaining Hejaz railway train terminates, and whilst the Foreign Office advice for the country as a whole fluctuated, it remained consistent on one point: do not enter Der’aa, though the border crossing a few miles away is fine. I resigned myself to a bus journey between Damascus and Amman. Days before I was due to leave, major demonstrations and violent crackdowns resumed across large sections of the country. Still the Foreign Office advice equivocated.

On April 14th 2011, I set off from London, armed only with a stash of House of Commons briefing papers on the situation in the Middle East and a freshly-issued Syrian visa, unclear exactly if and how I would reach my goal of the Red Sea. It was going to be the sort of holiday where, as the leader of the opposition had said a few days before, on the intervention in Libya: “We don’t always know how it ends.” Nevertheless, the desert beckoned.